It was two years ago when I first saw a mention of the hashtag #DisneySMMoms.  After following along some during the last day of the event, I was so excited to read over Tésa’s experiences she shared on her blog.  It sounded like such an amazing experience!  A part blogging conference, part family vacation and all sprinkled with the special Disney magic.  The event is invitation only and being a smaller blogger, I never expected to be invited.  With the events being such a great success, the amazing social media teams at Disney decided to take the event on the road!

Fast forward to May 5th, 2014 and an invitation arrived in my inbox!  I was filled with excitement and a little bit of nervousness.  We were heading to Florida and Walt Disney World the last week of May.  I would be going into the event coming off the excitement of our Disney trip.

It was June 17th and the time had arrived!  It was time for #DisneySMMoms in Chicago!  After reading many posts from other bloggers about what to expect, I was ready for the inspiration to follow from the event.  I just had no idea how much fun and inspiration that I would actually have.

As I walked into the lobby of the Hyatt Lodge the registration team awaited.  The bloggers who had arrived started chatting immediately.  Since the baby accompanied me, she was an easy ice breaker!  I met so many bloggers in person I have only dealt with online as well as a few bloggers I had connected with previously at SoFabCon last year.

Once the doors were opened to the conference room there was no doubt that it was a Disney event.  Maria and her BSM Media team did an amazing job ensuring it had all the fine touches you would expect from Disney.  Jamie Langdon, the Walt Disney World Public Relations and Social Media Manager hosted the event. 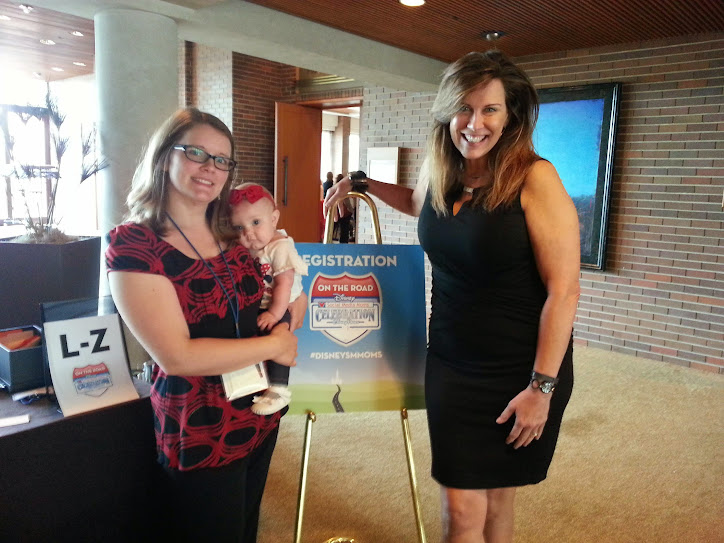 After a brief introduction from the fabulous Leanne Jakubowski O’Regan, Director of Social Media for Disney Parks, the Gary Buchanan took center stage.  Here is a man that loves his job and Disney!

Gary shared with us some new and exciting things happening around the parks, including a few things I just had the pleasure to experience!  After introducing the new MyFastPass+ service and the new Seven Drawfs Mine Train ride.  He shared the new campaign to launch the ride, Bethe8thminer.com that offers fun weekly challenges with a weekly chance to win $500 and a Seven Dwarfs Mine Train trading pin. The grand prize 8th Miner winner will win a 7-night vacation for four to Walt Disney World® Resort, where you’ll meet the crew and ride the Seven Dwarfs Mine Train!


Next up was Jenn Fickley-Baker who is one of the head bloggers on the Disney blog. She explained some of their social media strategies and how they determine their content.  They focus on making their connections with their readers through their storytelling.  We got to see some of the behind the scenes clips they shared on the blog about the Ultimate Tweet to announce the 24 hour Rock Your Disney Side event.  Using 140 actual Disney Characters to form a literal hashtag (#) that was photographed in about 20 minutes.  There was great excitement as this had not been done previously and many of these characters are never seen together.

One of the sponsors of the event was HP.  Lori Lorenz, Senior Director of Direct Print Services, shared with the group about some of the latest launches by HP including their Instant Ink program & the TwoSmiles website.  Being a part of the #HPSmartMom group I am very familiar with them both.  TwoSmiles is a great site that allow you to create a card with a gift card attached you can print right from home and the Instant Ink program allows your ink to be monitored and ordered automatically based upon the quantity of pages you sign up for.  Both services were created with busy moms in mind.

Next up was the fabulous Maria Bailey who hosted a panel of two Huggies Mom Inspired grant recipients: Lily Winnail from Padalily and Alicia Overby from Baby Elephant Ears. They spoke of how they have handled starting a new business, while balancing their families and their home life.    It was very inspiring to see other mothers have an idea, create it from start to finish and then with help from other moms create a flourishing business.

The final speaker of the day was a Chicago native, Ramon De Leon.  He has coined the phrase #RamonWOW and after hearing him speak I fully understand why.  I would love to have some of his energy!  He spoke about creating a connection and making an impression on your customers and readers.  One takeaway was to stop thinking in terms of likes, comments and think in terms of relationships!  He asked us, “Would you follow you?”

It was an event that made a great impression on me.  I will share my key actionable takeaways on another post shortly.  At the end of the event, the boss man himself made a grand appearance and we were treated with the opportunity to take photos with Mickey!  I can’t think of a more perfect way to have ended the Disney On-the-Road Event in Chicago.